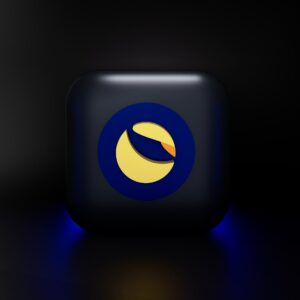 In the last few days, a stablecoin called TerraUSD and its native token LUNA had dropped significantly. The crash of Terra (LUNA) ecosystem had taken the whole crypto space on a sudden rollercoaster fall. It rattles the broader crypto market including major coins like Boitcoin and Ethereum.

How does Terra (LUNA) work?

The project in question is TerraUSD (UST), a blockchain protocol and decentralized financial infrastructure that leverages fiat-pegged stablecoins to power a price-stable global payments system. It offers fast and affordable settlements by combining wide adoption and stabilization of fiat currency with censorship-resistance of Bitcoin (BTC). Terra’s native token, LUNA, is used to stabilize the price of the protocol’s stablecoins.

Terra seeks to alleviate issues faced by the world’s top stablecoins. The network aims to reduce centralization in the market. Unlike the competition, Terra’s protocol functions across multiple blockchains. It acts as a bridge as well as seeks to remove technical limitations on these assets through its open financial infrastructure.

The Team behind Terra (LUNA)

Terra was founded in January 2018 by Daniel Shin and Do Kwon and its main-net officially launched in April 2019.

Prior to the conceive period of Terra, Do Kwon founded and served as CEO of Anyfi, a startup providing decentralized wireless mesh networking solutions. Kwon later put on another cap as the CEO of Terraform Labs, the company behind Terra.

Terra Partnership before the crash.

Terra had scored quite a  number of establishments with payment platforms in the SouthAsia region. In June 2019, Terra had announce its partnership with CHAI, a SouthKorea based payment system in which purchases made using the application on e-commerce platforms are processed via the Terra blockchain network with a 2%–3% fee charged to the merchant.  Per transaction. In Q4 2019, Terra scored another deal with Volo Lab to co-join in developing the next-gen payment system.

Their latest partnership before the fall. In February 2022, Major League Baseball’s Washington Nationals signed a $40 million, five-year deal with Terra. The deal compressed Terra’s endorsement throughout its stadium and has a premium seating club called Terra Club.

The LUNA token and UST are mutually dependent. LUNA backs UST and is burned when demand for UST rises and the value of LUNA can also decrease if UST is perceived as unstable. UST briefly lost its peg following the Wormhole hack, leading to a temporary price crash for LUNA. Do Kwon put a dent on the situation as he bought more than USD$3 billion worth of Bitcoin to defend the peg. His act had caused indirect inverse pressure on the market that cause other investors to let go of their bitcoin holding to fall to its lowest point since December 2020.

Sam MacPherson- an engineer at MakerDAO mentioned the design of stable coins algorithm will create upward force during the bull market. He also later highlighted, “But the same forces act in reverse during bear markets and expose their fundamental flaws. So that is eventually what triggered the crash.”

The crash damage is so severe that it wiped out the coins in the span of a few days. Investors panicked and tried to pull out their money, causing a ferocious, self-enforcing bank run. The crash turn many millionaires into bankrupt states and pulled down the entire crypto market with it. Many financial and crypto experts believe that as long as Terra’s managers focus on the fundamentals of the project and remain stable, the price of Luna could increase and recover some of the loss

The detailed events of the LUNA crash and Do Kwon.

9 May -11May: Terra (LUNA) made headlines globally on May 9th, 2022, after its stable coin, UST, lost its peg for the second time in 2-days. The panic that followed led to a collapse of the Terra ecosystem on May 10th. Within 48 hours, Terra had lost 99% of its value. 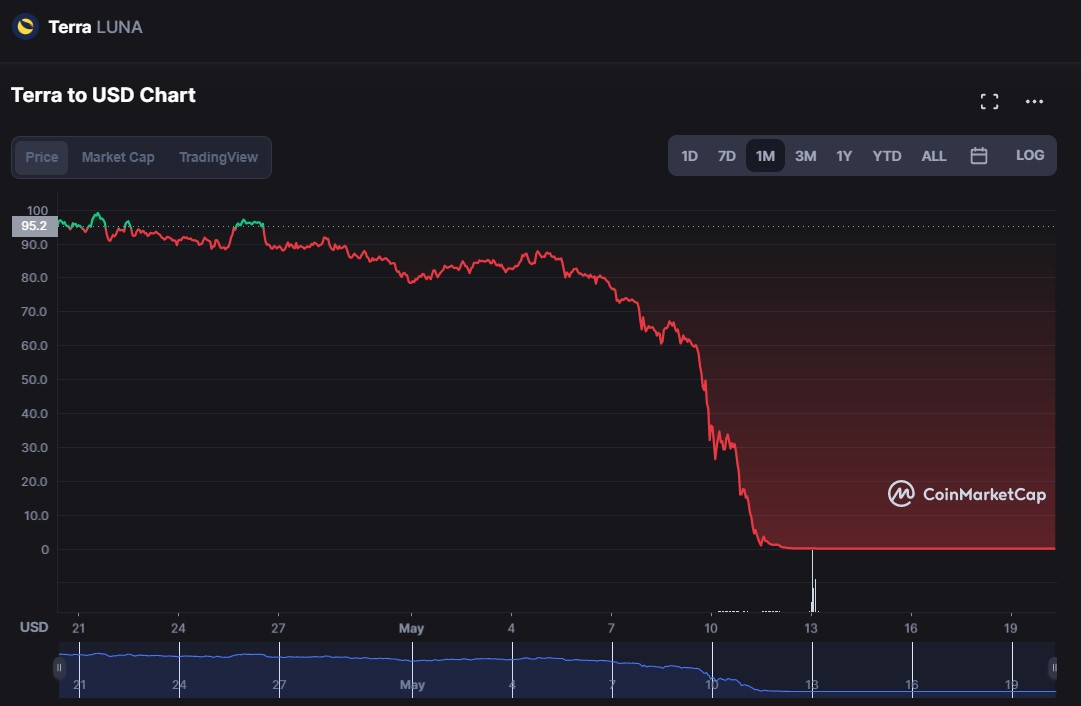 The Terra (LUNA) price as per listed on CoinMarketCap.

12 May:  In order to  prevent cases of administrative attacks after the LUNA token was severely inflated, the Validators on the Terra network decided to pause the blockchain at block number 7,603,700 on the 11pm of  12 May 2022. 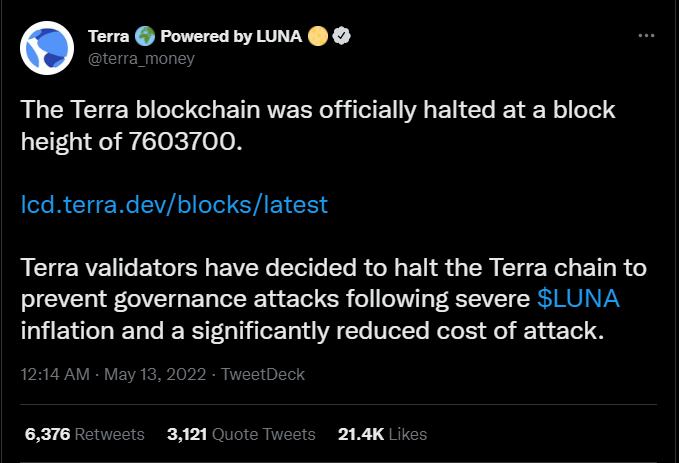 One enraged investor, who had reportedly lost US$2.3 million in the crash, tried to break into the home of Do Kwon in the South Korean capital of Seoul.

South Korean media wrote an unidentified person broke into her apartment building and rang the doorbell to ask if Kwon was home, before leaving the premises after she said he wasn’t. Kwon’s wife has now been provided with security after she requested emergency protection.

Binance’s Luna investment was worth $1.6 billion. Now it’s less than $3,000. But despite Binance’s big losses, CEO Changpeng Zhao said he still wants retail traders who lost money during Luna’s crash last week to be reimbursed before Binance is.

“To lead by example on protecting users, Binance will let this go and ask the Terra project team to compensate the retails users first, Binance last, if ever,” Zhao wrote in a tweet. 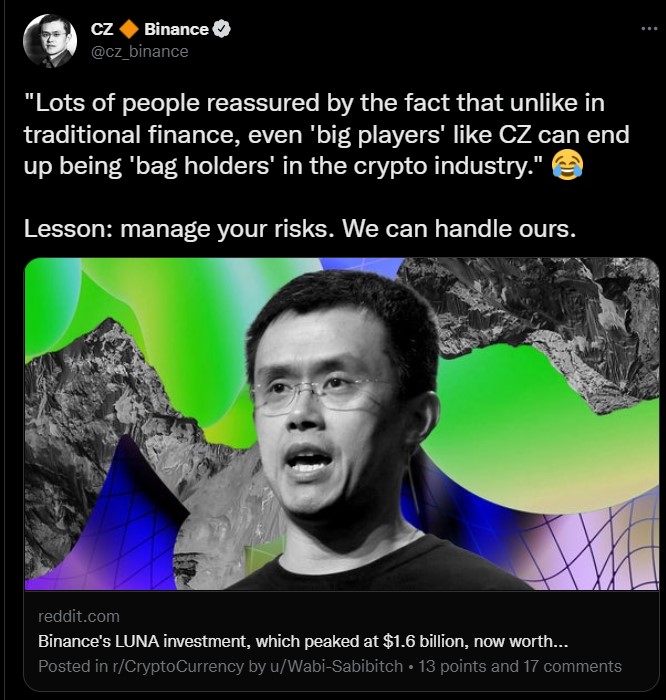 Do Kwon has officially put forth a governance proposal for community members to vote on his idea to ditch the UST stablecoin and create a new blockchain. 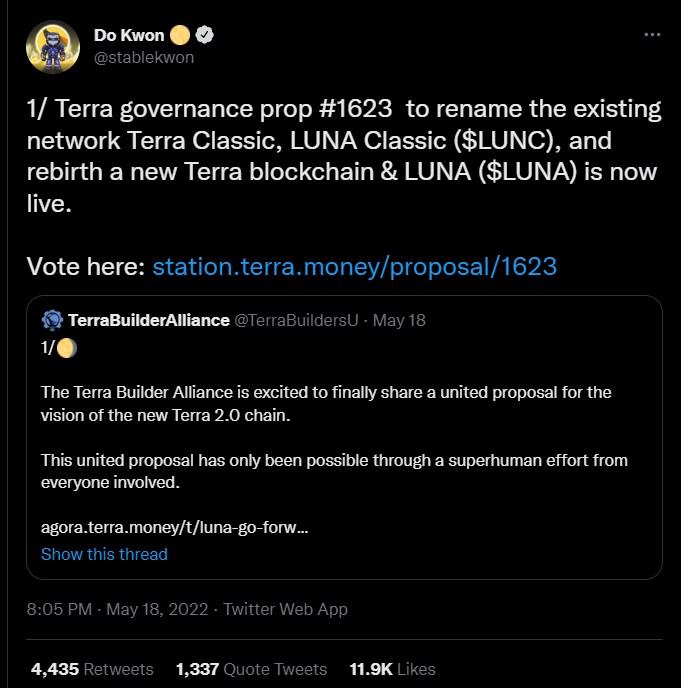 The new chain, according to Kwon, would ditch the TerraUSD (UST) stablecoin that crashed below $1. It would instead use cryptocurrency Luna.

Many community members posted negative reactions. But Kwon’s plan is winning support in early voting. Up to date, 89.65% have voted yes in the live vote, while 0.28% voted no, and 10.07% voted no with veto.

Michael Novogratz, CEO of Galaxy Digital, is a known supporter of the Terra ecosystem, including its Luna cryptocurrency and TerraUSD (UST). But since when UST crashed far below its $1 peg and brought down Luna with it, the billionaire has remained silent online—until today.

“In Luna and UST alone, $40bn of market value was destroyed in a very short amount of time,” Novogratz wrote in his public letter.“It was a big idea that failed. With hindsight things always look clearer. My tattoo will be a constant reminder that venture investing requires humility.” he said.

Some investors who had owned Luna posted on Reddit that people were suicidal after losing everything. Indeed, this is a trend happening in other parts of the world, with moderators of the Reddit threads on Terra and Luna pinning a post with suicide hotline numbers, over concerns voiced in the thread. 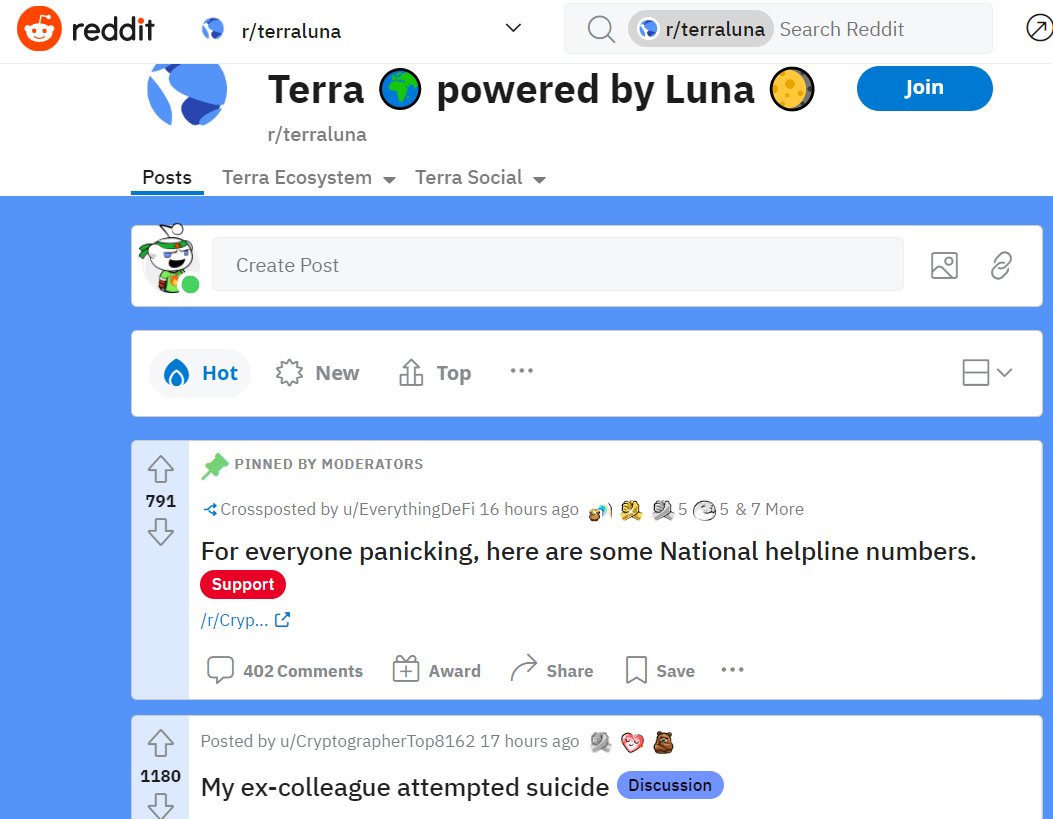 Kwon has now been likened to Elizabeth Holmes (Theranos)

Holmes and Kwon share the same commonalities, but Kwon stands out because his glint was never so obvious. He was able to finds more capital to flush through the holes in his sinking ship and at no point near acknowledging that he put the holes there when he built it.

There will inevitably be major lawsuits and even criminal prosecutions around the collapse of Luna. The defense in those cases will try and convince that Kwon’s failure was an honest shortfall. The same argument was central to the Elizabeth Holmes criminal trial. Holmes founded her company at age 19 but she had no real technological insights into how that might be accomplished. Holmes tried to argue, but a jury found her guilty of fraud.

Do Kwon was in his late twenties when he launched TerraUSD. He similarly promised investors something cool without a practical approach to actually building one.

South Korean speculators in recent days have piled into Luna. Most were betting that it will stage a miraculous recovery, with some clinging to the belief that it is just too big to be allowed to fail.

The window for speculation is limited as Bithumb and Upbit, two of South Korea’s largest exchanges, said they will suspend trading support for Luna on May 27 and May 20, respectively, while another, Coinone, has halted deposits in the crypto-currency ahead of a possible de-listing on May 25.

There is little the government can do to protect investors as cryptocurrency trading takes place outside its regulatory sphere.

Due to the high potential for a full collapse of the entire Terra ecosystem with a very high possibility of the token being delisted from major exchanges. The token is now almost worthless. We highly recommend for investors take serious measurements before heading to make any purchasing or selling decision.

We hoped you’ve enjoyed this piece and appreciate the time you spent reading. We love making and sharing content which are insightful and actionable. Stay tuned for more exciting content, coverage and latest news about the world of finance. Visit AxeHedge.com to learn more about what we do and how can we help you in your investment journey. 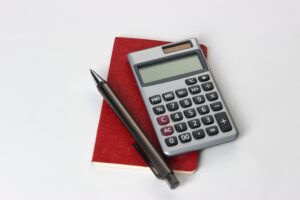 Simplifying Budgeting with the  80/20 rule. 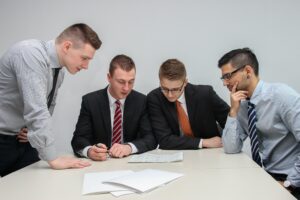 A quick guide for beginners on active and passive investment strategy. 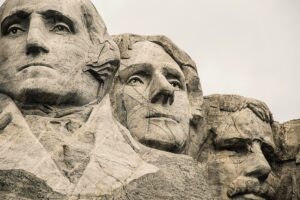 Will the US market face a recession? 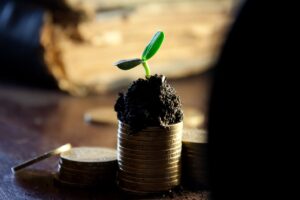 During periods of high inflation and a potential recession, dividends can be a great source of income for your investments. Listed below are 10 dividend stocks you should consider for your portfolio. 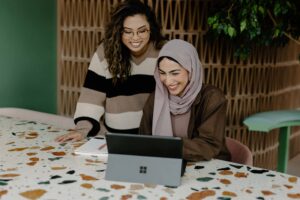 Know your goals before you can start investing! 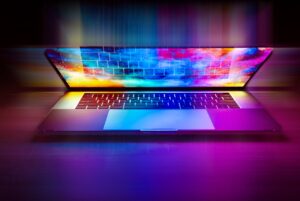